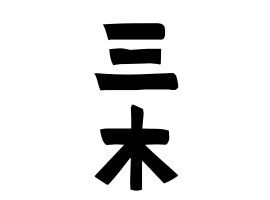 ① Toukyou-to Chiyoda-ku Birth of Chiyoda. Establishment of place name before the warring States era. A word with a record as an alias of Edo Castle. Saitama-ken Misato-shi There is a tradition in Hikawawado area (old: Shimoko Kawado). Saitama-ken Misato-shi tell him that he was engaged in agriculture at Honobo. Estimated in the Edo period.

② Topography . From the field I wished to last long. Fukuoka-ken Kurume-shi tells that he was engaged in agriculture at Tanushimaru-cho Sugawara. Estimated in the Edo period.

③ Korea type . Terrain . "Chi" to "a thousand," "rice" added. There was a record of naturalization on Yamaguchi-ken Yamaguchi-shi on October 19, 1981. The real name is a thousand. reference.