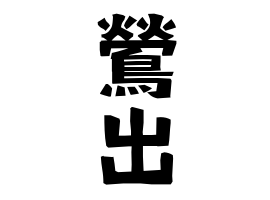 ① Originated from the vicinity of Chiba-ken Asahi-shi (formerly: Una Sea (Una Kami · Kaijou) County). A place name with a record since the Nara period.

② Iwate-ken Ninohe-shi Birthplace of Jōushigami Town Maritime (Kaiso) originated. A place name with a record since the Edo period. The place name has been changed from the name of Mr. Mr. Kao's name and changed from " Yamanashi-ken" (formerly Kai -ken ) to "Kai-sho (kai-sho)" that the soldier who came and lived in the Warring States period changed.

Iwate-ken Miyako-shi · Toukyou-to . In the Tohoku region there was "Yunnan" in the notation of the uncle God that worshiped as the incarnation of the eel that is the use god of the fictional bodhisattva. Iwate-ken Oushuu-shi Kinu River Yunnan is a place name unknown in the record era.