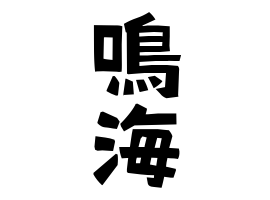 ① Aichi-ken Toyota-shi Birth of Fukami-cho. A place name with a record since the Kamakura period. Ehime-ken Imabari-shi Totomachi was in the Edo period in the Imabari clan of the Clan Office. The same clan says that Wakayama - ken Wakayama - shi came out as "deep water". Estimated early in the Edo period.

② Ooita-ken Usa-shi Originated from the vicinity of the Fukami River (formerly Fukami) which flows through Azabu-cho. A place name with a record since the Heian period.

③ Ishikawa-ken Wajima-shi The birth of Fukami-cho. A place name with a record since the Edo period. Toyama-ken Nakaniikawa-gun Tateyama-machi Tradition in Toshida. I tell him that I came here 1546 (Astronomical 15 years).

④ Topography . Kagoshima-ken Tarumizu-shi From the Fukami gate of the gate division system that was in the Edo era in the sea lagoon. The gate name comes from deep land. Wakayama-ken Nishimuro-gun It was in the Edo period in Kamitonda-chou Oka. In the same place he tells that his residence was called "Fukamihei".

⑤ Balhae system . Originated from the People's Republic of China near Heilongjiang Province (formerly Bohai (Bohai Province)). Mr. Taka who came to the western part of Kagoshima-ken (formerly Satsuma County) from Fujian Province of China from 1596 to 1615 (Keicho-year) came under the name of Balhae (Fukami) last name by tradition with the descendant of Bohai King Tell them that they changed their letters. reference. reference.