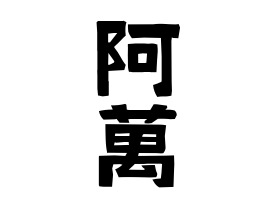 Originated from Toukyou-to Adachi-ku (formerly Adachi-gun). A place name with a record since the Heian period. In Hyougo-ken Tanba-shi , the Meiji new family name by the name of the owner of the Warring States period since the Kamakura period.

② Fukuoka-ken Kitakyuushuu-shi Origin of Adachi-ku Kokura Kita-ku. A place name with a record since the Edo period. Yamaguchi-ken Hagi-shi Horiuchi is a place of comparison of tradition to be taken from Adachi-soo of Fukuoka-ken eastern · Ooita-ken northern part (formerly Toyama) by the ship's head of the Choshu clan of the clan government.

③ variant of 安達 . Shizuoka-ken Fukuroi-shi It was in the Muromachi era near the Kunimoto (formerly Hisu Department). Tell him that he is the descendant of Adachi Morinaga, Admiral Morinaga, who is the warrior of the Heian period and the Kamakura period.

① Kumamoto-ken Uto-shi Birth of Shimoda Town, Oda Town. A place name with a record since the Muromachi period.

② things . Tottori-ken Tottori-shi Meiji New Last Name using "Net" by Fisherman of Toyama-ken Himi-shi . Nagasaki-ken Sasebo-shi Tell him that he was engaged in fishery in Nibaakakamachi. Estimated in the Edo period. Fukui - ken Sakai - shi Tell the story that you were using the shop name of Anda at Mikuni - cho Yasushima. Estimated in the Edo period.

③ Nara-ken Uda-shi Originated from the amida field of Amida which is a small figure of Oda - da Keduji. Tell the fact that it was also described as "Amida" in the vicinity. Estimated in the Edo period.