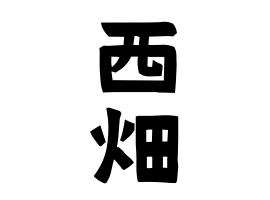 ② Abstract . Synthesis of Kudo and Hosokawa. Tokushima-ken Miyoshi-shi In the name of Yamashiro Town Kudo tells Mr. Kudo as the vassal of Mr. Hosokawa and called it during the Warring States Period. Toukyou-to Chiyoda-ku Chiyoda was in the Edo era as the shogunate of the Edo shogunate of the government agency. In the Mie-ken Chubu (formerly Ise-ku), the shogunate tells that he was renamed from Kudo surname under the life of Oda Nobuo during the Warring States Period. reference. reference.

③ Topography . From the wisteria and the river. Gunma - ken Shibukawa - shi In Akagi - machi Kashiwagi, I tell him that the wisteria was blooming on the banks of the river, so that in 1856 (Ansei 3 years) he was renamed from Kusabi surname. reference. Kagoshima-ken Aira-gun Yuusui-chou From the Fujikawa gate of the gate division system which was in the Edo period constantly.

⑤ Kagoshima-ken Hioki-shi Originated from Fujikawa, a small figure of Nagasato, Higashi Machibori Machi. There was Fujikawa gate in the same place in the Edo period as a gate division system.