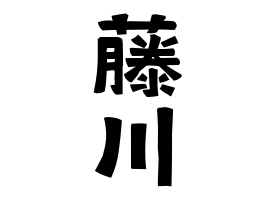 Gunma-ken Isesaki-shi . Thing . In Gunma-ken Isesaki-shi border Shimoguchi, I tell him that Myoshi Shrine of Shinosai Shingon sect in the same place was a temple whose main honor is Miroku Bodhisattva. There is also a story that the same name was renamed from Kobayashi surname in the Edo period. reference.

① Nara-ken Sakurai-shi birth of three wheels. Place name with a record since the Kofun period. The place name was also pronounced as Oomiwa, also written as "Okami", "Ozawa 3", "Miwa Miwa", "Miwa", "Miwa", "Sanwa". Aichi-ken Nagoya-shi Honmaru Honmaru was in the Edo period in the Owarii clan in the Clan office. The same clan says that he changed his name from Terajima surname to Sanwa surname and renamed it further. reference.

③ Korea type . Creation . Added "three" to "wheel" including car. Oosaka-fu Oosaka-shi There is a record of naturalization on Sumiyoshi-ku on August 22, 1964. The real name is a car. reference.

④ Convention . The third stand. Third eye "three" is used. There was a case that Wakayama-ken Wakayama-shi renamed in 1950. reference.

※ Gifu-ken Gifu-shi Miwa is a place name with a record since the Muromachi era. The place name was also written as "Miwa". It is distributed in the same place.

※ Nagano-ken Nagano-shi Miwa is a place name recorded in the notation of "Sanwa", "Miwa" in the Kamakura period. It is distributed in the same place.

※ Shizuoka-ken Fujieda-shi Okabe-cho Miwa is a place name with a record since the Sengoku period. Tell the gods of the same shrine (Miwa) Shinto shrine was a priest since the Kofun period.