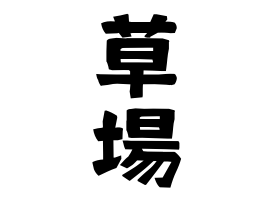 Gunma-ken , Shizuoka-ken , Kanagawa-ken . Occupation . Variant of the 監物 . reference. Gunma-ken Takasaki-shi It was during the Warring States period as a vassal of Mr. Nagano who was the castle owner of Minowa castle in Minoucho cho. Chiba-ken Minamibousou-shi Wada town In Shiba tell Kanagawa-ken Odawara-shi that he came to live in 1180 (4 years old) after the battle of Ishibashi.

※ Gunma-ken Azuma-gun Azuma-cho Iwai, Kanagawa-ken Odawara-shi tells that the followers had a sword at the time of the eastward expedition of Yamato Takeru which will be the Yayoi era from the Imperial.

※ Niigata-ken Nagaoka-shi in Fukasawa-cho Kanagawa-ken Kamakura-shi Snow It is Komakura Shogunate's authority of the Kamakura Shogunate who was the authority of Sakunaga and Komachi in the mounds when traveling around the countries in 1258 (Masaka 2 years) Tell them that the residents who were absent and had no surname gave it. From tradition to mound there was the name "surname mound".