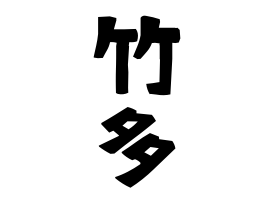 ① Chiba-ken Sousa-shi Origin of camellia. A place name with a record since the Edo period. It is distributed in the same place. There was Tsubakiha before the reclamation near the same place. Chiba-ken Matsudo-shi Tell them that they are groundbreaking in Mainzu Shinda.

③ Convention . Abbreviation for Tsubakido Tradition in Ibaraki-ken (formerly Hitachi country). Unknown times. It is unknown whether Tsubakido will exist.

④ things . From the plant camellia. Niigata - ken Gosen - shi Tells that it is a pioneer in Ogasone. First letter surname of Amagi archipelago of Kagoshima-ken .

⑤ Things . Tottori-ken Touhaku-gun Yurihama-chou Tell that Tanaka combined the springs of Harukiya's "spring" and "tree" together in the Edo period.

* There was a case that Mr. Tachibana other than the birthplace of Empress Danburyu was renamed to Camellia surname in 840 (Seiwa 7 years). reference.