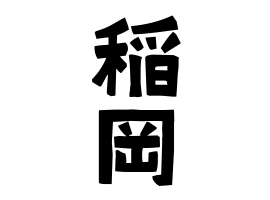 Fukuoka-ken Fukuoka-shi Eastern District, Kagoshima-ken . Terrain . From the new forest. Kagoshima-ken Ibusuki-shi From the forest gate of the gate division system that was in the Edo era in the west way. 林 There surname. reference. Fukuoka-ken Fukuoka-shi Hata- ku Nagata is headquartered. I tell him that he had been engaged in the shipping industry since coming from 1688 to 1704 (Genroku year). There is also a story that he came from Kagoshima-ken for the defense of Genji who was in the same place in 1274 (11th year of Bunbunaga) · 1281 (4th year of Hiroshi). Fukuoka-ken Noogata-shi Imabayu in Nakaizumi is a place name with a record since the Edo period. Kyouto - fu Nantan - shi Sonobechi (Old: Imabayashi) Town is a place name with a record since the Heian period. Kyouto-fu Funai-gun Kyoutanba-chou In Ono tells that he was engaged in agriculture and forestry. Estimated in the Edo period.