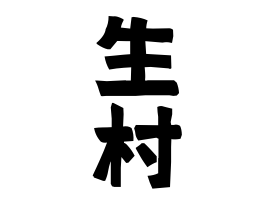 ① Mie-ken Yokkaichi-shi Origin of Izaka-cho. A place name with a record since the Warring States Period.

② Topography . 井坂 's variant. Akita-ken Akita-shi Chiaki Park was in the Edo period in the clan san Kubota of the Clan office. The same clan says that Ibaraki-ken is out.

③ Topography . "Saka" is added to Italy which is the surname of the Kamoshima-ken Amami archipelago. There was a case in Hyygo-ken Koube-shi where the name of renamed was changed between 1952 and 1959 on the ground that it is confusing to foreigners. reference.

④ Korea type . Terrain . "Slope" is added to "I" including Yun. Oosaka-fu Oosaka-shi Minato-ku, Hiroshima-ken Mihara-shi has a record of naturalization on October 26, 1962. The real name is Yoon. reference.

※ Saitama-ken Kuki-shi Izaka is a place name with a record since the Edo period.