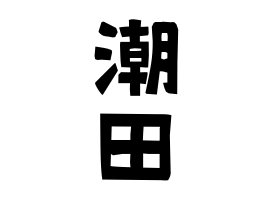 Nagano-ken , Aichi-ken , Miyagi-ken . Nagano-ken Oomachi-shi Originated from the vicinity of Lake Kiyosaki (formerly Hannokuchi ). Use "Haikou" "Ocean". The place name was also written as "Hanakuchi" in the Edo period. Tell him that it was called the Sengoku period in the vicinity of the agricultural river flowing through the same area. It was in the Aichi-ken Kitanagoya-shi during the Edo period. The pronunciation is Kaiigawa. Aichi-ken Kitanagoya-shi There was a record in Nishiyoho in the notation of "Hai River" in 1744 (first year of the extended year). It is unknown whether the Hai River exists.

① Origin of Ooita-ken Usa-shi . A place name with a record since the Edo period. It is distributed in the same place.

Baekje system ※. In the southern part of Kyouto-fu (formerly Yamashiro country) there was a surname of the late servant during the Heian period.

Fukuoka-ken Yukuhashi-shi . There are surnames including "Autumn".