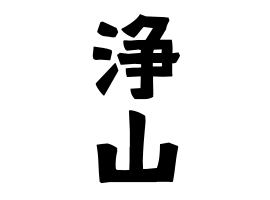 ① Nagano-ken Originated in Kamakitai-gun and Shimokitai-gun. A place name with a record since the Asuka period. Gunma-ken Tone-gun Minakami-machi Tradition in a downtown. In the southern part of Gifu-ken (formerly Mino country) tell Toki that he called it during the Kamakura period. reference. Good neighbor . Nagano-ken Chikuma-shi There is distribution in the stones.

※ Niigata-ken Niigata-shi Naka - ku Takaikino is a stopover. A place name with a record since the Edo period. The place name tells from Mr. Takai that Mr. Takai resides from Nagano-ken around the Warring States Period.

④ Ehime-ken Matsuyama-shi Originated in Takai-machi. Place name with a record since the North / South morning era. Yamaguchi-ken Hagi-shi Horiuchi was in the Edo period in the Choshu clan of the clan office. There is a tradition to the same clan.

⑥ Tokushima-ken Awa-shi Originated from Tsuchinari Denso Machi (formerly Takai). A place name with a record in the Heian period.

⑧ Korea system . Thing . Add "Well" to high. Kagoshima-ken Kagoshima-shi has a record of naturalization on March 16, 1962. The notation of "Official Gazette" is "Takai". The real name is high. reference.

② Based on the surname of the Amami archipelago of Kagoshima-ken , there is a court. reference. reference.