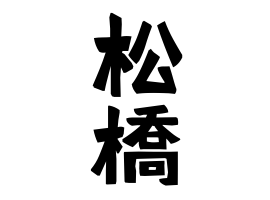 * Gifu-ken Ibi-gun Ibigawa-chou There was a case called Mr. Masayuki Mura who was a castle owner in the Sengoku period since the North-South morning era in Miwa's Ikari Castle (aka: Miwa Castle). reference.

① Originated from Yamiyo-cho of Saga-ken Imari-shi . A place name with a record since the Kamakura period.

② Ishikawa-ken Originated from the mountain of Kaga-shi . Place name with a record as "Yamagata" in the Nara era. The place name was also written as "mountain castle". Ishikawa-ken Komatsu-shi In Takigahara-cho I tell you that I came to the Edo period.

③ Shimane-ken Izumo-shi Origin of Oyama-cho. Place name with a record since the North / South morning era. Tell him that it is from "Mountain" of Oyama and "Okinawa" of the whole family name. reference.

There was a case where the citizen of the mountain area left the mountain "in the mountains" by honing the mountain part of Emperor Kanmu who is the Emperor of the Nara period and the Heian period. reference.