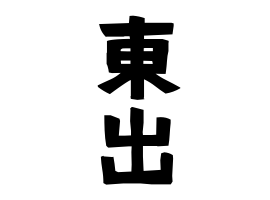 ① Convention . Abbreviation for Nitta. Tochigi-ken Tochigi-shi Nishikata Town in Niigata-ken Nishikata Town tells that Mr. Nitta was referring to the new surname as a camouflage. Estimated in the Northern and Morning era. reference. Saitama-ken Hidaka-shi Komagino Shinshida (Sinden) is a place name with a record since the Edo period. It was in the Edo period in the same place. Good neighbor . Fukuoka - ken Itoshima - shi Mikumo, Tokushima - ken Naruto - shi It is distributed in Omi - cho Kawasaki.

④ Creation . From new things. Toyama-ken Takaoka-shi In Fushikiyada you tell me that you are Meiji new surname . The pronunciation is Arata. Ishikawa-ken Hakusan-shi Aikawa Shin (Saogosin) The town has been recorded since the Edo era. Tell him that he was engaged in agriculture and fishery in the same area. Estimated in the Edo period. Shin is the mainstream in Ishikawa-ken . Kagoshima-ken Kagoshima-shi From the new gate of the gate division system in Fukuyama town that was in the Edo period. First letter surname of Amagi archipelago of Kagoshima-ken . Kagoshima-ken Ooshima-gun Kikai-chou was in the Edo era in red.

※ Okinawa-ken Ishigaki-shi Shinkawa (Arakawa) is a place name with a record since the Kingdom of the Ryukyus. It is distributed in the same place.