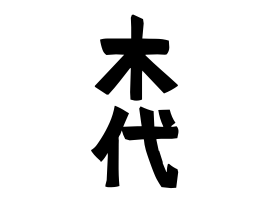 ① things . Yamaguchi-ken Hagi-shi Horiuchi was in the Edo period in the Choshu clan of the clan office. The same clan says that he was renamed from Matsubara surname because he wrote a short sword with inscription of Kokomi from Yoshitaka Ouchi, a warrior of warring States era. reference. Hiroshima - ken Hiroshima - shi There is a tradition that Tsuboi in Saeki - ku has had a sword with the inscription of Xuan Feng Ying. reference. Yamaguchi-ken Hagi-shi In Oshima there is a transmission with the descendant of the fallen of Heike. reference.

② Kouchi-ken Kounan-shi Yuzu-machi birth of Kokko. A place name with a record since the Muromachi period. There is also a record of Kokomo as the name of the master.