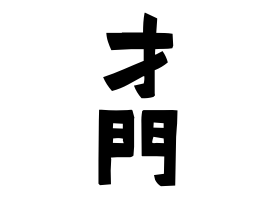 Saitama-ken , Gunma-ken , Tochigi-ken . Gunma-ken Takasaki-shi Origin of Shiba-town. As the town name was the place name established in 1987. The shiba Township with a record in the Nanboku era is a place where the same place is located. Gunma-ken Tomioka-shi Nishikaichi was in the Edo era in the Nanikaichi clan in the Clan office.

Fukuoka-ken Noogata-shi . Thing . From the tongue. Fukuoka-ken Noogata-shi The upper boundary is based. Mr. Utsunomiya who was a vice president of Mr. Otomo in Ooita-ken (formerly Bungo country) in the same place tells that it was given in the meaning "to rule rationally with bastards" because his poor tongue was Muromachi period. reference.

※ Ehime-ken Yawatahama-shi The tongue between the tongues is a place name with a record since the Muromachi era.