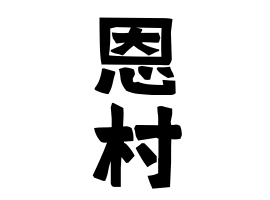 ① Kanagawa-ken Kamakura-shi Originated from Kajiwara. A place name with a record since the Heian period.

② Topography . Kagoshima-ken Kagoshima-shi From the Kajiwara gate of the gate division system in Uzboro town that was in the Edo period. The name of the gate is from Kaji and Hara.

③ Kagoshima-ken Soo-shi Originated from Kajihara Tan (Kajiharadan) in Ogi-machi's Suda tree's small character. There was a Kajiwara gate in the same area in the Edo period as a system of division.

※ Okayama-ken Mimasaka-shi Kajiwara is a stopover. A place name with a record since the Edo period. Tell the place name from what Kajihara had in the Kamakura period. The place name was pronounced as Kanajihara.