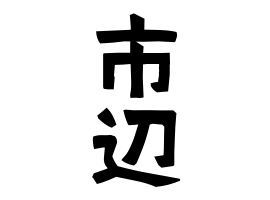 ① Originated from the vicinity of Chiba-ken Isumi-shi (old: Inn). Place name recorded from the Heian period to Sengoku period. The place name means "South of Izumi County". It was in the Chiba-ken during the Warring States Period.

② Fukushima-ken Minamiaidzu-gun Originated from the vicinity of the Ina river (Old: Inn) that flows through Minamiaidzu-machi . A place name with a record since the Edo period. The pronunciation of the last name is also ina.

③ Korea type . Terrain . "South" is added to "I" including Yun. There is a record of naturalization on Oosaka-fu Yao-shi on July 22, 1977. The real name is Yoon. reference.

Toukyou-to , Saitama-ken · Chiba-ken . Creation . Mr. Ina uses "Wild" for the particle "of". Estimated early in the Edo period. In Ishikawa-ken Hakusan-shi tells Nagano-ken as descendant of Ina who came to 1583 (Tensho 11 years). reference.