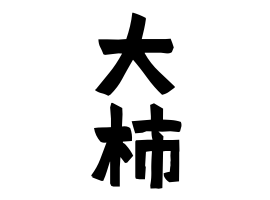 ① Kagoshima-ken Soo-shi Originated from Ogi-muri, Ogi-machi's small character. In the same era there was a gate for divorce system in the Edo era.

② Topography . Kagoshima-ken Shibushi-shi From Ogino Momono of the gate division system which was in the Edo era in Matsuyama Town Yasuno. The gate name comes from the land where Ogi, the field and the mountain are near.

※ Fukushima-ken Minamisouma-shi Haramachi ward birth of Ogi Sako (Ogisako). In the Kamakura period there was a place name recorded with the notation "Hagon". The place name was also written as "Ogi. Fukushima-ken Souma-shi Nakamura was in the Edo period in the Samma Nakamura Samurai of the Clan Office. Tradition of the same samurai.

Hokkaidou , Ishikawa-ken Wajima-shi , Kumamoto-ken Amakusa-shi . Terrain . From the land that protruded from the coast. Ishikawa-ken Wajima-shi Wajimazaki cho is a place name with a record since the Edo period. Tell him that he was engaged in fishing in the same area. Estimated in the Edo period. The land faces the Sea of Japan. Kumamoto-ken Amakusa-shi is based in deep sea town. The land faced the Yatsushiro Sea.