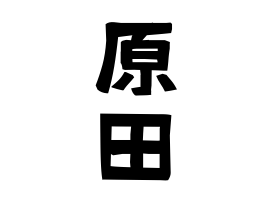 ① Convention . Abbreviation of Fujiwara. Shiga-ken Takashima-shi In Kuchiki Murai tells that descendants of Mr. Fujiwara who was in the Heian period in the same place used "Fuji" to name it. Kyouto-fu tells Mr. Koizumi that it is Mr. Fujiwara's descendant in Kyouto-shi called in the early Edo period. reference. Meiji New surname by monk who used "wisteria" from monk in the Kamakura period and Shinran of the founder of Jodo Shin Budo as Mr. Fujiwara's descendant. An example of a temple. Toyama-ken Namerikawa-shi Noda Temple of Jodo Shinshu in Ryoke-cho. Good neighbor . Nara - ken Gojou - shi Distributed in the east of the field. reference.

* There is an example of using a "valley" at a store of a shop name. Akita-ken Yuzawa-shi Distributed in Senatoru pine.

② Birth of Kanagawa-ken Kamakura-shi Fanghaya (old: Fujitani (Fujiya Yatsu)). Tell the place name that there was Mr. Fujiwara's mansion in the Kamakura period. It was in the Chiba-ken Chubu (formerly Kazusa) during the Warring States Period. reference.