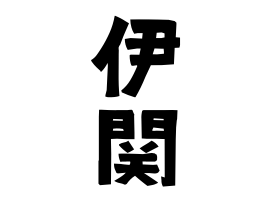 ① Kumamoto-ken Ashikita-gun Ashikita-machi Birth of Ichinose (Ichinose) A place name with a record in the notation of "Ichase" in the Warring States Period. Ichinose's "city" is used as "one". It is distributed in the same place.

② 市口 of the profile. At Fukuoka-ken , at the Meiji New surname, the official suggested a birth surname with fewer strokes than the city and surnames, so tell them that they adopted it. Pronunciation pronunciation is igo.

③ Kyouto-fu Kuse-gun Kumiyama-chou Origin of Nishi-Ichiguchi (Imoi Ray). A place name with a record since the Kamakura period. The place name was also written as "potato wash". In Kyouto - fu , it is immortal. Because it will be crowded like washing potatoes at one entrance.