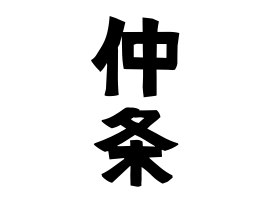 ① Shiga-ken Yasu-shi Birth of Nagahara. A place name with a record since the Muromachi period.

③ Kagoshima-ken Satsumasendai-shi Originated from Nagahara, a small figure in Miyazato-cho. There was Nagahara gate in the same area in the Edo period as a system of division.

④ Topography . From Miyazaki - ken Kobayashi - shi Hosono within the gate division system that was in the Edo period from Nagahara gate · Outside Nagahara gate. The gate name is a variant of 長原 .

※ Kyouto-fu Kyouto-shi had the last name of Nagahara Asunji in the Heian era. Tamaki king of Nagoya, the royal family of the Nara era, tells that the descendants have renamed the family name of Asuke Fujiwara. reference.