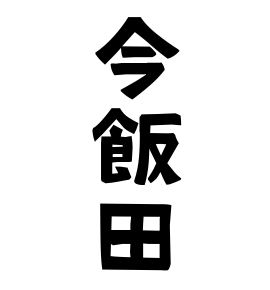 ① Kyouto-fu Kyouto-shi Originated from Iwakura in Sakyo Ward. The name of the place with a record in the notation of "Ishizo" during the Heian period. Place names are also written as "Iwakura", "Ishikura", "Ishigaki". Kagawa-ken Mitoyo-shi In Yamamoto-cho Kanda tells that he came from Kyouto-fu Kyouto-shi in the Warring States Period.

② Aichi-ken Toyota-shi Originated in Iwakura-cho. A place name with a record since the Edo period.

③ variant of 岩峅 . It was in Warring States period in Toyama-ken .

④ Tokushima-ken Mima-shi Wakimakicho Iwakura birth. Place name with a record since the North / South morning era. It was in the Sengoku period in the same place.

⑤ Topography . Kagoshima-ken Kimotsuki-gun Minamioosumi-chou From the Iwakura gate of the gate division system that was in the Edo era in the northern part of the root river. The gate name comes from the land where rocks stand out.

⑥ Korean type . Thing . "Rock" is used from Gyeongju Lee's founder's tradition of Gyeongju city, Korea's Republic of Korea. There is a record of naturalization on Toukyou-to Oota-ku on August 2, 1972. The real name is Li. reference. reference.