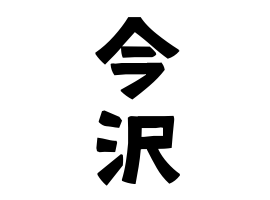 ① Topography . Ishikawa-ken Wajima-shi It tells from the rocky land of Kakurajima in the sea town.

② Creation . "Many" was added to the rock which is the surname of Amagi archipelago of Kagoshima-ken . Estimated at the time of returning to Japan in 1953. reference.

① Gifu-ken Gifu-shi Birth of Iwata Higashi Iwasaki. A place name with a record since the Edo period.

③ Wakayama-ken Nishimuro-gun Kamitonda-chou Originated from Iwata. A place name with a record since the Heian period. The place name was also written as "Ishida".

④ Fukuoka-ken Ogoori-shi Birth of Uewaita · Shimowada. A place name with a record since the Kamakura period.

⑥ Ibaraki-ken Tsuchiura-shi Origin of Oiwa - wada. A place name with a record since the Kamakura period.

⑧ Korea system . Thing . "Rock" is used from Gyeongju Lee's founder's tradition of Gyeongju city, Korea's Republic of Korea. Oosaka-fu Oosaka-shi There was a record of naturalization on April 26, 1989 at Ikeno-ku. The real name is Li. reference. reference.

Tokushima-ken Tokushima-shi Tokushima cho was in the Edo period in Tokushima Samurai of the Clan office. The same clan says that Iwasa of Aichi-ken Ama-shi (formerly Haito-gun) was a vassal of Nobunaga Oda, a warrior of warring States and Azuchi-Momoyama period. Location unknown.