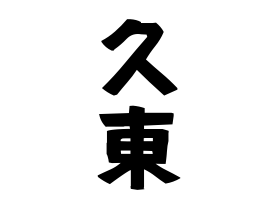 ② variant of 桑折 . Fukushima-ken Souma-shi Nakamura was in the Edo period in the Samma Nakamura Samurai of the Clan Office. The same clan says "mulberry" as well.

③ things . From Fukushima-ken Minamisouma-shi neighborhood in Kashima-ku (formerly Oguni- gun Mano Township) from the county house of the administrative office where the county priests were located.

④ Oosaka-fu Originated in Ibaraki-shi County. A place name with a record since the Edo period. During the Sengoku period, Fukuoka-ken Kurume-shi Shinoyama-machi was in the Edo period in the Kurume clan in the Clan office. The same clan says that Hyougo - ken Kawanishi - shi 's Tada is out.

⑤ Topography . First letter surname of Amagi archipelago of Kagoshima-ken . Kagoshima-ken Ooshima-gun It was in the Edo period in Kikai-chou .