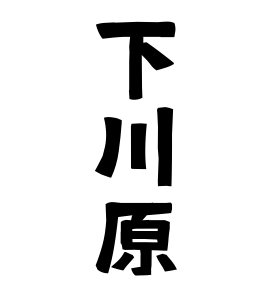 * Hiroshima-ken Akitakata-shi Birth of Yoshida-cho consortium (Iow). A place name with a record since the Warring States Period. It was in the Sengoku period in the same place.

① Convention . Abbreviation for Yeongjong (Coleman). It was in the Nagasaki-ken Tsushima-shi during the Kamakura period. Nagasaki - ken Tsushima - shi 's Tokubara - machi was in the Edo era as the lord of Tsushima Fuchu of the clan office. It is unknown whether Yoshimune exists.

③ Korea type . A variant of 宋 . "Sousu" similar to Song is used. There is a record of naturalization on Nagano-ken Chino-shi on August 9, 1963. The real name is Song.

※ Bohai system . It tells Shimane-ken west (formerly Iwami-kuni) that there were 56 Balhaeans residing in June in 874 (pagan 16 years).