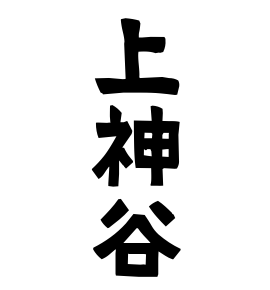 Originated from Kanda of Toukyou-to Chiyoda-ku . A place name with a record since the Warring States Period.

② Fukuoka-ken Originated in Kanda-cho, Kyoto-gun. Place name with a record in the notation of "Kariya" during the Heian period. The place name was written as "Kanda" and "Kanda", and there was also pronunciation of Kata.

③ Origin of Saga-ken Karatsu-shi Kanda (Koda). A place name with a record since the Edo period. It was in the Kamakura period on the same day. In Yamaguchi-ken it is Ko Da.

⑤ Topography . From the field belonging to the shrine. In Okayama-ken Ibara-shi tell them that they managed the fields owned by the shrine. Estimated in the Edo period. Jinden is pronounced. Kagoshima-ken Kanoya-shi From the Kanda gate of the gate division system which was in the upper name of Genpei town during the Edo period.

⑦ Hiroshima-ken Onomichi-shi Originated from Kanda in a small character in Harada - machiya.

⑧ Heteromorphism of 嘉味田 . In Okinawa - ken Okinawa - shi telling that it was renamed from Kashimida family name since 1945. The pronunciation is Camida. reference.

⑨ Korean type . Personal name . "God" is used from Shinnon (Sinnon, Korea sound: Shinon) which is the emperor of the legendary Sina who tells as Mr. Kang's founder. There is a record of naturalization on April 7, 1956 at Saitama-ken Ageo-shi (formerly Kita Adachi-gun, Ageo-machi). The real name is Kang. reference.

⑩ Korea type . Terrain . "Da" was added to "God" including the proposal. Oosaka-fu Oosaka-shi There is a record of naturalization on July 23, 1964 in Nishinari-ku. The real name is a proposal. reference.