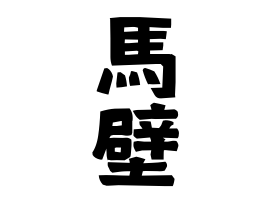 ① Topography . From mountains and villages. It was in the Okinawa-ken period during the Ryukyu Kingdom.

※ Qin series . There was a family name of Yamamura who was told that she came back to the western part of the Republic of Korea (old: Baekje) in the descendant of the Emperor of Qin.

④ Miyagi-ken Sendai-shi Originated from the vicinity of Izawa (Izumura) in Izumi-ku. A place name with a record since the Kamakura period.

⑥ Korean type . Originated from Yeongsan village of Gyeongju city, Gyeongsangbukdo, Korea (Archeon Yangsan Chung). From the fact that Lee Hwangpyeong, the founder of Mr. Gyeongju Lee who is the main character, built one of the six villages in Shilla's founding myth. There is a record of naturalization on Toukyou-to Nerima-ku on July 1, 1958. The real name is Li. reference.

⑦ Korea type . Summary . Use "mountain" included by Choi. There is a record of naturalization on Nagano-ken Chino-shi on September 26, 1977. Choi is the real name. reference.