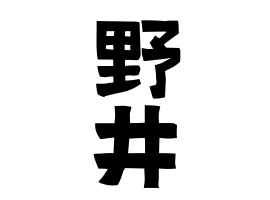 ① Aichi-ken Nagoya-shi Birth of Chikusa-ku (old: Furui (koi)). A place name with a record since the Muromachi period. It was the pronunciation of carp in the same era in the Sengoku period.

② Kagoshima-ken Soo-shi Originated from Furui (Koi) in the minami of Kitamata Tibu-cho. There was Furui gate of the gate division system which was in the Edo period in the same place.

③ Aichi-ken Oobu-shi The origin of old well in Yokonecho. It is distributed in the same place.

④ Kouchi-ken Aki-shi Origin of Furui (carp). A place name with a record since the Warring States Period. It is distributed in the same place. Last name is carp.

⑤ Things . Shizuoka-ken Kamo-gun Matsuzaki-chou On the south side of Iwasaki · Iwasaki North, Mr. Nakamura told from the old well of the mansion that it was called from 1830 to 1844 (Tenpo year). reference.