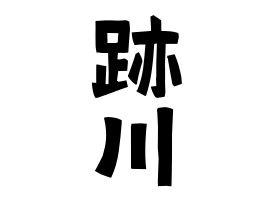 ② Origin of Shizuoka-ken Shizuoka-shi (formerly Abe County). A place name with a record since the Nara period. The place name was also written as "Abe", "Abe", "Abe". There is also a story that the place name is said to be Mr. Abe's residence. Ooita-ken Used in shi and handed down. Saitama-ken Fukaya-shi Okabe was in the Edo period as the lord of Okabe of the Clan Office. Tell the same lord that Shizuoka-ken Hamamatsu-shi is out.

③ Convention . Abbreviation of Abe no. Shimane-ken Nita-gun Okuizumo-chou Tell her that descendants of Mr. Abe, a substitute who was in the Northern and Morning era in Yokota abbreviated. reference.

④ Korea type . Creation . Added "department" to cheap. There is a record of naturalization on Toukyou-to Nerima-ku on December 13, 1958. Last name is cheap. reference.