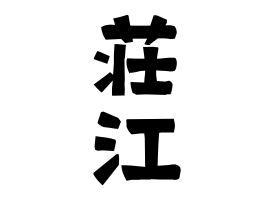 ① Topography . From a nearby village. Tokushima-ken Mima-shi Tell him that he was engaged in agriculture and forestry in Kogetsu- cho old palace . Estimated in the Edo period.

※ Ehime-ken Matsuyama-shi Marunouchi was in the Edo period in the Iyo Matsuyama clan of the Clan office.

② Origin of Shiga-ken (formerly Omi). Place name with a record since the Kofun period. Iwate-ken In Osaki-cho of Hanamaki-shi tells that it is a combination of Omi's "near" and Nakamura's "village" with real name. Estimated in the Edo period. reference.