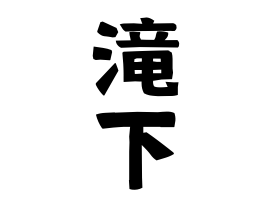 ① Fukuoka-ken Yanagawa-shi Originated from Nishitetsuru of Yoshikaze's small figure in Yamato-cho. A place name with a record since the Edo period. Fukuoka - ken Chikugo - shi Tradition in No - machi. Meaning of "Tsuru".

② Creation . Shimane-ken Hamada-shi A shrine was in the Edo period in the clan of Hamada of the clan office. The same clan tells that he used "wild" for the particle "of" to "crane" which he had called from Tsuru in the outing of Yamanashi-ken Tsuru-shi . Tsuru is a place name with a record in 761 (Tenpyo Treasure 5 years). The place name was also written as "crane". reference.

③ Tochigi-ken Ootawara-shi Toyama-ken or Ishikawa-ken is said to be a pioneer in Pyeongtaek. In the same place there is an example of using a crane roll as a family crest.

⑥ Topography . "Wild" was added to the crane which is the surname of Amagi archipelago of Kagoshima-ken . Estimated at the time of returning to Japan in 1953. reference.

⑦ Personal name . Iwate-ken Toono-shi Told that Mr. Mr. Masuzawa who was using the name of Tsuruma from the woman's name vine and the man's name, Mr. Tsuruma, was given to the Edo period in the middle . reference.