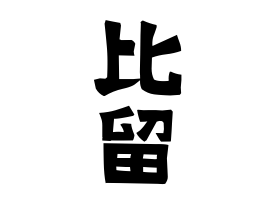 ① Topography . From before. Ishikawa-ken Nomi-shi There is a tradition in Shimonoe-cho. Tottori-ken Sakaiminato-shi Takeuchi Town tells that it was from the fact that it was divided before Shibuyama surname in the Edo period. reference. Hiroshima-ken Hiroshima-shi It was in the Edo period in Saeki-ku Yuki-cho Daiki Tada. First letter surname of Amagi archipelago of Kagoshima-ken . There is also pronunciation of recommendation at the same place.

※ Hayato system . In the west part of Kagoshima-ken (formerly Satsuma County) there was a surname of Saki in front of the Nara period.

② Origin of Okayama-ken Southeastern part (formerly Bizen). A place name with a record since the Asuka period. The child of Mr. Huo Bizen modern country who was in the warring States era in Shimane-ken west (old: Iwami country) tells that descendants used "Bizen" before Bizen, using the country as the surname. reference.