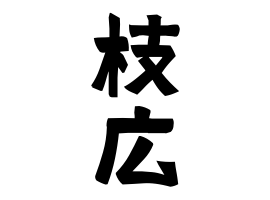 ① Kyouto-fu Kyouto-shi Originated from the great branch (Ohae) in Saikyo Ward. The name of a place with a record in the notation of "Oe" during the Heian period. It is given from Emperor Kanmu, the emperor of the Nara period and the Heian period. "Baishi" of the original notation was renamed to the Oe family name of the same tone so that the house will last forever like a big river for the reason that it is linked to "the branch is big and the trunk of the tree which is the body is broken" . reference.

※ Yamagata-ken Higashine-shi Oe Nitta is a stopover. A place name with a record since the Edo period. Tell the place name from what Mr. Oe developed.

② Shiga-ken Ootsu-shi birthplace of Oe. A place name with a record since the Kamakura period. It is distributed in the same place.

③ Nagasaki-ken Tsushima-shi Birthplace of Minami- machi Sago (formerly Oe). A place name with a record since the Muromachi period.

④ Topography . "Jiang" is used for carpenters. In Hyougo - ken Koube - shi there was a case that changed from the carpenter 's surname between 1952 and 1959. reference.