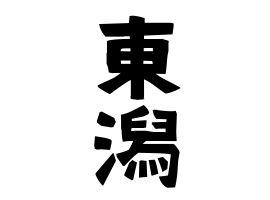 ① Creation . "10,000 years", "long years". Hokkaidou Sapporo-shi At the south 29th west east chuo district Chuo-ku, tell the monk that the priest named it so that you can live like a turtle at the outing of Yamagata-ken . Estimated in the Edo period. Yamagata-ken Yamagata-shi Kasagi-machi was a Yamagata samurai of the clan office, Yamagata-ken Tsuruoka-shi Baba-cho was in the Edo period in the Shonai clan in the clan office. Yamagata - ken Tsuruoka - shi In 1776 (Yasunaga 5) in Shinmeicho we say that we changed from Konan surname. reference. In Shizuoka-ken Haibara-gun Yoshida-chou Kawajiri in 1185 to 1190 ( Bunrō year) Kyouto-fu Kyouto-shi at the Kyoto Imperial Palace in the Kyoto Imperial Palace wrote "Miyo is a million years" and the Emperor of the Heian period · Kamakura period I will tell him that it was given by Emperor Toba after a while.