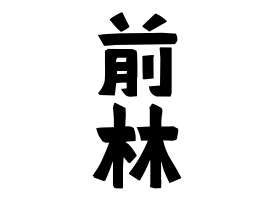 ① Topography . From the mountain. Shiga-ken Ootsu-shi In Bei Komatsu told Meiji new family name . First letter surname of Amagi archipelago of Kagoshima-ken . Kagoshima-ken Ooshima-gun Tokunoshima-chou It was in Edo era in Kameitsu. There is a transmission from Yamaya's shop name at Toyama-ken . Meiji New Last name in estimation.

※ There was Yamago's family name in Heian era in Nara-ken .

② Mie-ken Iga-shi island originally brought up by Yamaguchi. I used Yamaguchi's "mountain". It is distributed in the same place.

※ Abstract . Abbreviation of mountain area. There was a case that abbreviated the mountain part of the emperor of Kamu Emperor who is the Emperor of the Nara period and the Heian period in 785 (4 years of extension). reference.