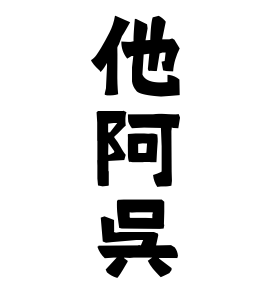 ① Convention . Toukyou - to Oota - ku Tell Tanukawa who escaped the war in avoiding the war and told him that he remained the monthly wheel 's moon for camouflaging. Estimated in the Warring States Period. reference.

② Ishikawa-ken Hakusan-shi birthplace of Tsukihashi Town (formerly Tsukioroshi Village). In the Kamakura period the name of the place with a record by "Tsukibashi" notation. It is distributed in the same place.

③ Estimated from the village where the moon is visible. There is a place name including "Monday". Good neighbor . Nara-ken Nara-shi Distributed in Higashi Nozaka Town.

④ Korea type . Originated in the city of Gyeongju (aka Tsukishiro (Walson)) in the Republic of Korea. Tsukijo's "moon" is used. There was a record of naturalization on Ibaraki-ken Hitachi-shi on July 10, 1963. Kirei is Kure. reference.