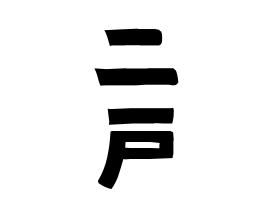 ① things . From Bou (Bow). Ishikawa-ken Kanazawa-shi Tell the story that it was using the shop name of "boko" at Buddhist monk who manages Kannon in the watching Temple town. There is a surname including "tassel". Oosaka-fu Oosaka-shi Hayashiyoshi ku Takaji is based. Shiga-ken Oumihachiman-shi Oobusa Town is a place name established as a town name in 1954. The place name was commonly called "Osasa". It is distributed in the same place.

② Korean type . Creation . Add "book" to tassel. Oosaka-fu Oosaka-shi There is a record of naturalization on March 5, 1981 in plain ward. Family name is tassel. reference.