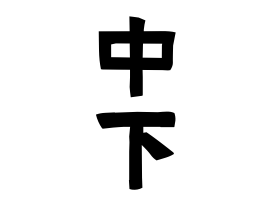 ① Topography . From the eastern field. Oosaka - fu Higashioosaka - shi In Aramoto tells that the light temple of the Shin Buddhism in the same place was named during Meiji New surname. Ishikawa-ken Komatsu-shi In Takigahara-cho told Meiji New surname . Kouchi-ken Kouchi-shi Marunouchi was in the Edo period in the Tosa clan of the clan office.

③ Shiga-ken Nagahama-shi Yuzo Higashino, Yousu-cho. A place name with a record since the Edo period. It is distributed in the same place.

④ Sina series . Terrain . "Wild" was added to "East" that Chen contains. Gunma-ken Oura-gun There is a record of naturalization on February 4, 1974 at Ooizumi-machi . The real name is Chen. reference.